I had the opportunity to interview one of our ChiWriMo members on her recent release, (well, okay, I kind of pounced on her and wouldn’t let her get away until she agreed to be interviewed).  So here, without further ado, is what we’ve all been waiting for:

CWM: Which came first, writing or dance? How do they inform each other for you?

BML:  Dance definitely came first for me. It was one of those things my mom put me in because she liked dance, the same as her mother. And whether it be nature or nurture, I liked it too. A lot. And specifically Ballet. In Ballet, the dancer takes a melody and brings it to life. The invisible becomes physical and tangible. If that’s not the closest thing to real magic in this world, then I don’t know what is. Perhaps that wonder extends into my love of writing. Like Ballet, it should be impossible. When I sit down to tell a story, I lack touch, sound, taste, color. All I have are words on a blank sheet of paper. But through those words, I can take the reader to new places, introduce them to new characters and make them feel in new ways. It’s amazing!

CWM:  Your new book is Under Winter Lights: Part One. What was the inspiration for it?

BML:  There is a wonderful film from 1948 called, The Red Shoes. It is an imaginative re-telling of the Hans Christian Anderson fairy tale and features my favorite ballerina, Moira Shearer. I can’t count how many times I have watched that movie and it made me want to take a world rarely portrayed in literature and bring it to life.

CWM: How many Parts can readers hope for?

BML:  Two. The story, as I originally conceived it, proved to be a bit too ponderous as a stand-alone novel.

CWM: How has participating in National Novel Writing Month changed your writing?

BML:  Oh my gosh, so much! Before I tried National Novel Writing Month a few years ago, my writing habits had capsized. I wanted to write, but I lacked the self-discipline to make myself sit down and flex those creative muscles. Then one day, while I was scrolling through my Facebook feed, I saw a friend mention she was doing NaNoWriMo. I asked what she was talking about. When she explained, I couldn’t shake the idea. Here was a chance to right a habit I wanted so much to reclaim. No excuses. I signed on and have not looked back. National Novel Writing Month gives writers a chance to flourish and fight for what they want most-to create. NaNoWriMo helped me take control of my sinking ship and steered me towards other writers trying to do exactly the same. And as if that wasn’t enough, I am now able to proclaim that I am a published author, a title I never once believed would be mine.

CWM: What are your plans for your dance and your writing in 2017?

BML:  Do both more and with increased creativity and efficacy. Hopefully.

BML:  Milk chocolate. But the good stuff. Not some waxy $.99 chocolate bunny from 7-Eleven.

CWM: How ’bout them Cubs, man? How do you feel about the Cubs winning the World Series?

BML:  I can’t believe it actually happened. For as long as I can remember, my father has joked about what a hopeless mess the Cubs are. When I got married,even though my husband was a die-hard fan, he admitted what a disappointment the team was. But they did it! And it’s been really nifty seeing a city rally around the Cubs. Signs everywhere, people cheering in bars together. In such a social media world where people rarely look up from their devices, it felt wonderful to come together as a community, to feel that sense of camaraderie. Go Cubs, Go!

BML:  All of them. If I had the space and disposable amounts of income, I would have sixteen cats and seven chow chows. My ideal snuggle fluff purrs, has a blue tongue, and holds my heart on a string.

Thank you to Bree for taking the time to share a little about her writing, and her new release, with us!  Guys, she’s even got a book trailer.  How cool is that?

Blurb: The world of Ballet had always been Martina’s world, made of music and magic. But the seasons are changing and like the snow tumbling over Chicago, Martina’s music-box world is swirling.  Director of The Bellus Ballet Company, Alan Jung, can offer her luxury and fame. But Russian rebel Maraav, “a wolf with gray eyes,” has everything Martina needs.  Three hearts made of hope, flesh, and stone…  With the curtain set to rise…

Under Winter Lights: Part One 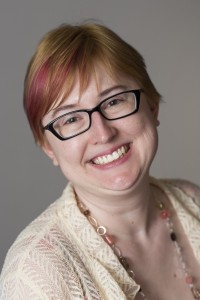 I got to chat with Robyn about writing, NaNoWriMo, and her book.  Take a peek!

CW: What 1 word best describes your hero and/or heroine? Why?

RB: Badass. (Badass is one word, right?) Andee is an assassin, and not just any assassin. She’s an empath who uses her psychic abilities to find and exploit weaknesses in her targets. I love the image of her on the cover. She’s the muscle in her relationship, ready to do anything to protect her mates. Andee kicks a lot of butt in Sunsinger. She’s much like Carmen in Nightfall and Bryn in Morningstar, who are all very “Give me the gun so I can save you!”

CW: What was your inspiration for this book and the main characters?

RB: I love the epic drama and adventure of space opera. Laser pistols! Space battles! YES. There’s a bit of Star Wars, Star Trek, Firefly, and Mass Effect in the Cy’ren Rising series. Sunsinger is my Return of the Jedi, complete with a final battle of good versus evil that takes place both on the ground and in orbit. Galen is the brains, Andee is the brawn, and Malcolm is their heart. They were a blast to write (this book was my 2013 NaNoWriMo novel, and it always helps to have a fun story for NaNo).

CW: Is this story part of a series? Will there be more stories in this series?

CW: What subgenres do you write in and who are you published with?

CW: What do you love about writing in your romance sub-genre? 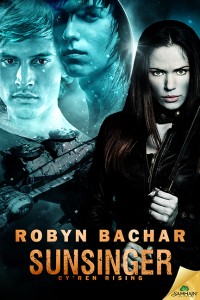 Her desire unites them. Her secret could destroy them all.

The sole survivor of the Sunsinger massacre, Lord Degalen Fairren spends his days reading tales of the family he never knew. When a rival house threatens to enslave Cyprena, Galen is forced to pull his nose out of his books and enter into an alliance with House Morningstar, and a dangerous mission to save his world.

Lady Andelynn Harrow isn’t House Morningstar’s eldest or prettiest daughter, but she is the deadliest. After her father’s murder, Andee must defend her new house and mate—the shy, reluctant Galen—but every battle risks revealing her terrible secret.

Malcolm gets his first taste of freedom when the Cy’ren recruit him to locate the cure to a deadly virus—and feels the burn of desire for Galen, the lord he can never have, and for Andee, who awakens memories of a long-lost first love.

The danger they face fuels the heat between them, but with Cyprena’s fate hanging in the balance, the race to find the cure could come with devastating costs.

Warning: Contains a blushing, virgin lord, a sexy geek, and an empathic assassin who always brings lube on a mission.

NaNoWriMo is starting soon - and with it, ChiWriMo is getting ready to write words, kick butt, and take names.  And to help us do just that, we have a special … END_OF_DOCUMENT_TOKEN_TO_BE_REPLACED